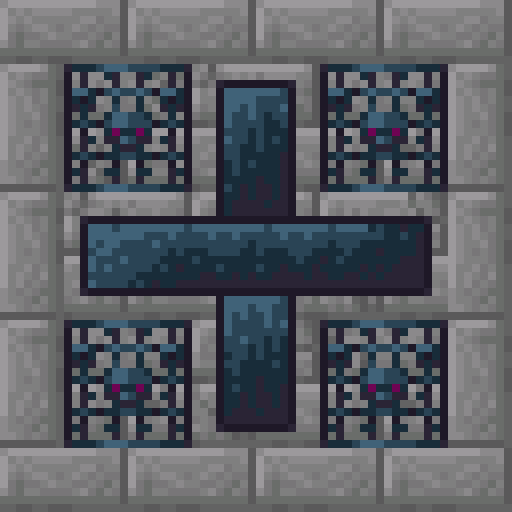 Dungeons Plus adds 5 new dungeons to the game with maps to guide you on a journey between them.

These towers have four floors with monster spawners and loot. The first three floors are randomized and can be zombie, spider, or skeleton rooms. The fourth floor is a vex room. Inside this tower, you can find a map that will lead you to the buried dungeon. Generates in either plains, forests, roofed forests, birch forests, and mountains.

Found underground, this dungeon contains three spawner rooms. To the left and right, you can find either a zombie or skeleton room, or rarely a husk or stray room. The room in the middle will either have husks or strays. When you enter the husk or stray room, you’ll find a map to lead you to either the Leviathan or the Snowy Temple respectively.

This ancient skeleton can be found in deserts and hides a secret beneath. Dig your way down, and you’ll be met with a husk spawner. Not only that, but husks are the only mob that can spawn in the structure, and the husks that do spawn there will drop sand on death.

Within this icy pyramid, you can find yourself in a small maze of ice with the strays living within around every corner. Strays spawned within this structure can drop ice, or rarely packed ice, on death, and they’re the only mob allowed to spawn inside.

Once you defeat the dragon and gain access to the outer islands, you may be lucky enough to find this dilapidated structure. There isn’t much loot inside, but at the top of the tower, you can find a dragon egg. Be careful though, the endermen inside aren’t quite as peaceful as the ones outside of the structure.

Yes, you definitely can. Just make to provide credit to all the authors respectively and link back to the CurseForge page.